After an impressive migration with DobiMigrate, the technical lead at CHU de Nantes, authored the following testimonial in French on his own professional blog. Datadobi has translated this blog to English to share on our website.

CHU de Nantes worked with partner SVL in France to Migrate from VNX to Isilon.

That’s it! After having presented to you  a few days ago, our next relocation of CIFS resources from our VNX to Isilon, our first volume (the largest!) has just been successfully migrated. The overall operation went very well with virtually no user calls. Let me tell you more about its progress. You see, you’ll want this like a Red Ferrari (private joke).

In the beginning there was “SITULA”, an enormous, shapeless mass (salespeople would call it “unstructured data” ^^) of office files, videos, audios, texts etc. Let me describe it in a few figures:  14.8 million files, 1.8 million directories for 11.6 TB. A beautiful beast, though. The result of about 15 years of activity sharing services and hubs, users (almost 9,000 people today) have gradually appropriated this volume and its original office vocation has given way, insidiously, to a conglomerate of different and varied uses far from Word, Excel or PowerPoint (we even found Harry Potter sometimes ^^). Our major mistake has been not using quotas or file types to restrict use by thousands of people having access to it. As a result, recent inflation averaged between 20 and 40 GB per day (for a generalist file space, I remind you) …

So, we drag this historic resource as heavy burden since several years, and we were not able to find a solution to “get rid of it technically” and definitively (on a IT scale, we mean, say 5-10 years). We had tried almost everything, without success (I give you the numerous Robocopy environment migrations). But, at last, we saw the light! The end of the nightmare was within reach.

Since the beginning of May, we implemented the DobiMiner tool and our Isilon extension, in order to launch the big maneuvers as soon as possible (time was short, because the space devoted to the numerous CIFS resources reached saturation). So, on the morning of May 18, 2017, we attacked the biggest problem head-on, the famous SITULA.

To make sense of the context, our previous relocations of this volume had become more and more complicated, with sync times at exponential durations (several hours of operation resulting in several hours of downtime). With DobiMiner, here are the statistics we got (warning, you will be shocked :-)) 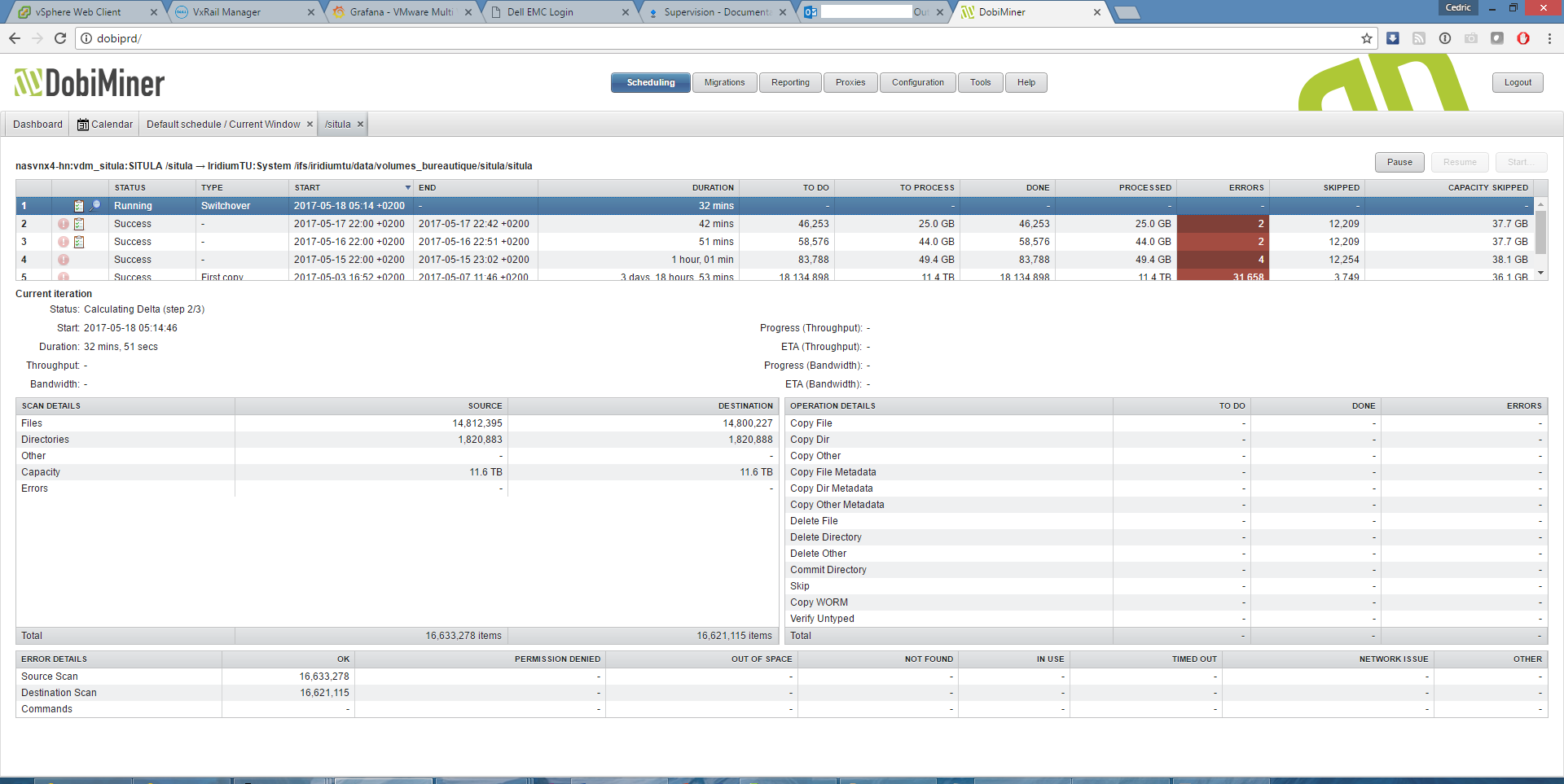 Our strategy during this period of recopying was, rather than completely disrupting access to the volume, to make it available only in read-only mode. Indeed, in general, when a shared volume as universal as SITULA is not available for one reason or another, we often face downstream effects that are rather inconvenient for our users (mainly the slower opening of sessions, that wasn’t the only one).

Because the transfer itself was no longer DobiMiner’s domain, it was simply a matter of modifying our DNS records so that the SITULA resource no longer pointed to VNX NAS but to the SmartConnect CIFS zone of our primary Isilon cluster (we replicated the set of Isilon data on a secondary cluster via SyncIQ). We also modified the “SITULA” SPN records of our Active Directory, so that end user authentication on the new shares of the volume goes smoothly. This handling is relatively familiar to Windows/AD experts, and consists in using the command “setspn” to add the FQDN of the zone SmartConnect CIFS:

To infinity and beyond!

Since the transfer ended at 6:00 am, we were expecting, with confidence, but also a certain excitement, the massive arrival of our “daytime” users between 7:00 and 8:30 am. Of course, we followed the activity of our primary Isilon cluster during this period. After 10:00 am, it was clear that everything went perfectly well, and that this operation had all the features of success! Load distribution of the SmartConnect also followed our recommendations to the letter, balancing by the number of connections:

We are now in nominal, with about 6,500 CIFS clients connected and … always 0 calls!

After almost 10 years of regular misery, our first “office” volume is migrated! That being said, we still have about twenty volumes to move, of lesser importance but still necessary to complete this Celerra to Isilon migration. This should probably take us until the end of June this year. If everything continues to happen beautifully according to plan, we will be able to decommission our two NAS VNX environments!

Ah! Yes! I forgot (but I’ll talk about it later): Goodbye NDMP backups that took several hours in delta and several days in full: Now we do data protection (replications and snapshots)! The first step towards a world of production without backups? We will see …

Contact us to learn more about this or other Datadobi products.